As Louisiana legislators fought to stop school integration, Xavier's Sisters of the Blessed Sacrament declared that forced segregation was a violation of Scripture.

In 1954, the US Supreme Court ruled in Brown v. Board of Education that America’s schools must be desegregated. The State of Louisiana resisted, passing bill after bill to enforce segregation, including a bill authorizing the governor to shut down all Louisiana public schools “to maintain peace and order.” In 1960, federal marshals had to protect four black first-graders whose parents had dared to send them to previously all-white schools.

Xavier’s Sisters of the Blessed Sacrament usually avoided public conflicts, but what was happening on the streets of New Orleans that year struck right at the heart of their mission. In a half-page ad in local newspapers, they declared that “Biblical scholars know there is no scriptural foundation for segregation. The claim for such a foundation in the Bible is absolutely and unequivocally false.” It was a bold move, not only because it defied Louisiana’s government, but because the Archdiocese of New Orleans still segregated its schools. What the Sisters were doing at Xavier, however, was even bolder. Although Louisiana law generally forbade black and white people to sit together in public places, Xavier’s music department regularly put on operas for integrated audiences. In 1959, Xavier’s art department hosted a national, “interracial,” art show and contest.

“The Sisters—even though they didn’t have pulpits because only male clerics had pulpits—they were preaching,” says Xavier President C. Reynold Verret. “This is Xavier saying ‘this is what is possible…We can actually live as brothers and sisters and children of God.’”

When Xavier's Sisters of the Blessed Sacrament issued a "call to Catholic New Orleans" to condemn forced segregation, they met a hail of abuse. Letters sent to Xavier called them "depraved" and "communists," and accused them of "seek[ing] the destruction of this country." A secretary from a newly integrated school, however, wrote to say that the Sisters' statement was "most beautifully written," and Xavier's own students held a rally to thank them.

Read the Sisters' letter and some of the responses to it 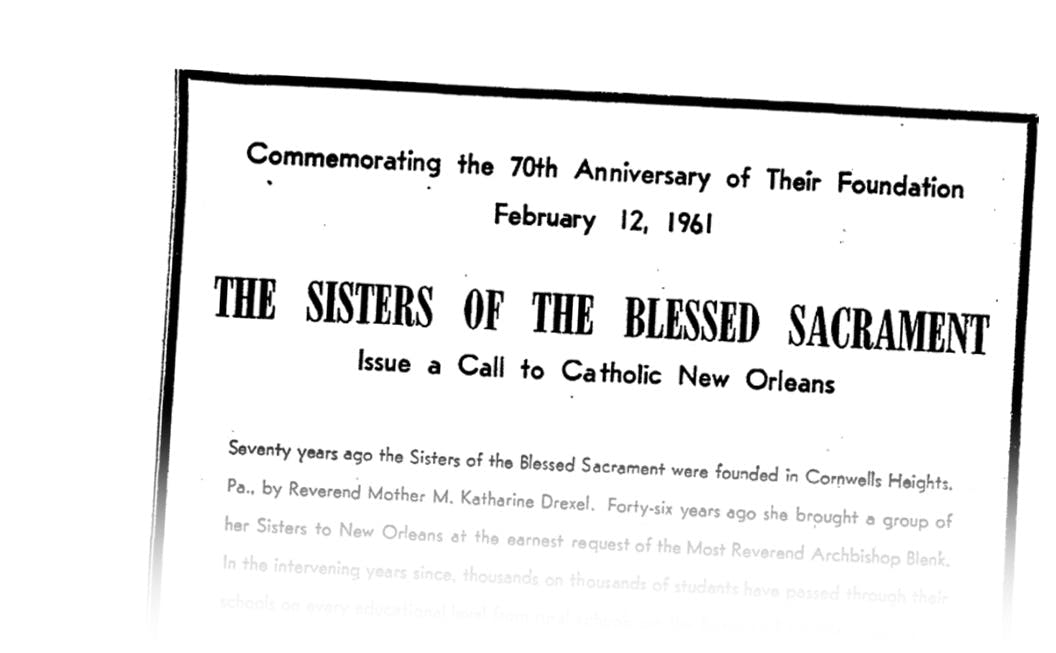