When Norman C. Francis stepped into the President's office in 1968, Xavier was running out of money. Some questioned whether the university could survive.

Mother Katharine's death in 1955 deprived Xavier not only of its beloved foundress, but of its main source of funding. According to the terms of her father’s will, Mother Katharine's fortune was dispersed after her death among charities that her father had chosen before his own death, long before Xavier existed. To make matters worse, many donors assumed that the Catholic Church was now generously supporting Xavier, when in fact it had mostly cut off funding.

Many questioned whether President Francis and his team could maintain Xavier's high standards. But as it turned out, not only did they maintain them, they far exceeded them. Enrollment increased dramatically. The campus expanded and modernized. Xavier's endowment increased during President Francis's tenure from $20 million to more than $160 million. Meanwhile, some uniquely talented Xavier professors were racking up academic successes. “People ask me how I managed to stay as university president for 47 years,” Dr. Francis says. “I always say 'I hired people smarter than me and stayed out of their way.'” 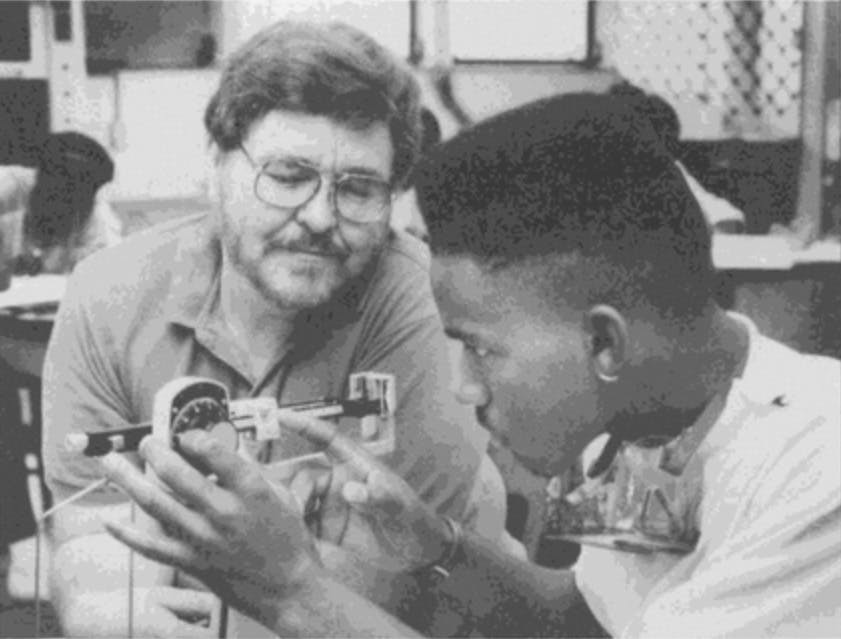 "Dr. Carmichael was like that zany uncle who’d let you get away with things that your parents would not, yet still he was a respected authority figure. As my premed advisor, he met constantly with me as I prepared my application to medical school. The same meetings that I now conduct with Xavier premeds, I attended as a Xavier premed; the same letters that were sent home to inform my mom of what I had (and had not) done in premed advising, I now send them to the parents of currently enrolled students." 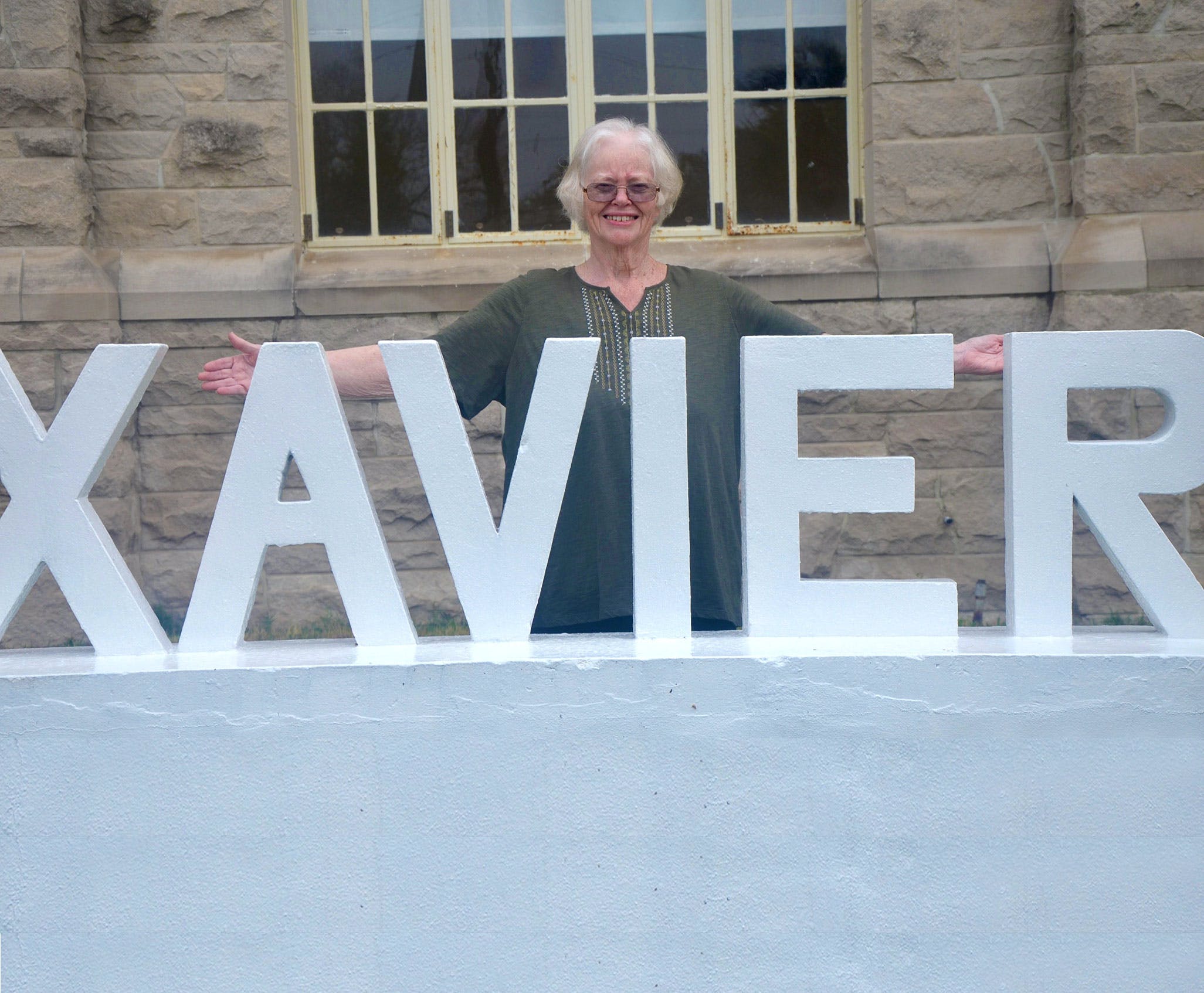 Sister Monica Loughlin (XU '69) was a member of President Francis's first graduating class. Then she got her Ph.D. and joined Xavier's faculty as a professor of biology. Then she became chair of its medical technology department, then dean of Arts and Sciences. She also served as president of the Sisters of the Blessed Sacrament until 2005, after which she worked to help Xavier recover from Hurricane Katrina. By that time, as one of her Xavier colleagues noted, Sister Monica had basically become "assistant to everyone for nearly everything." 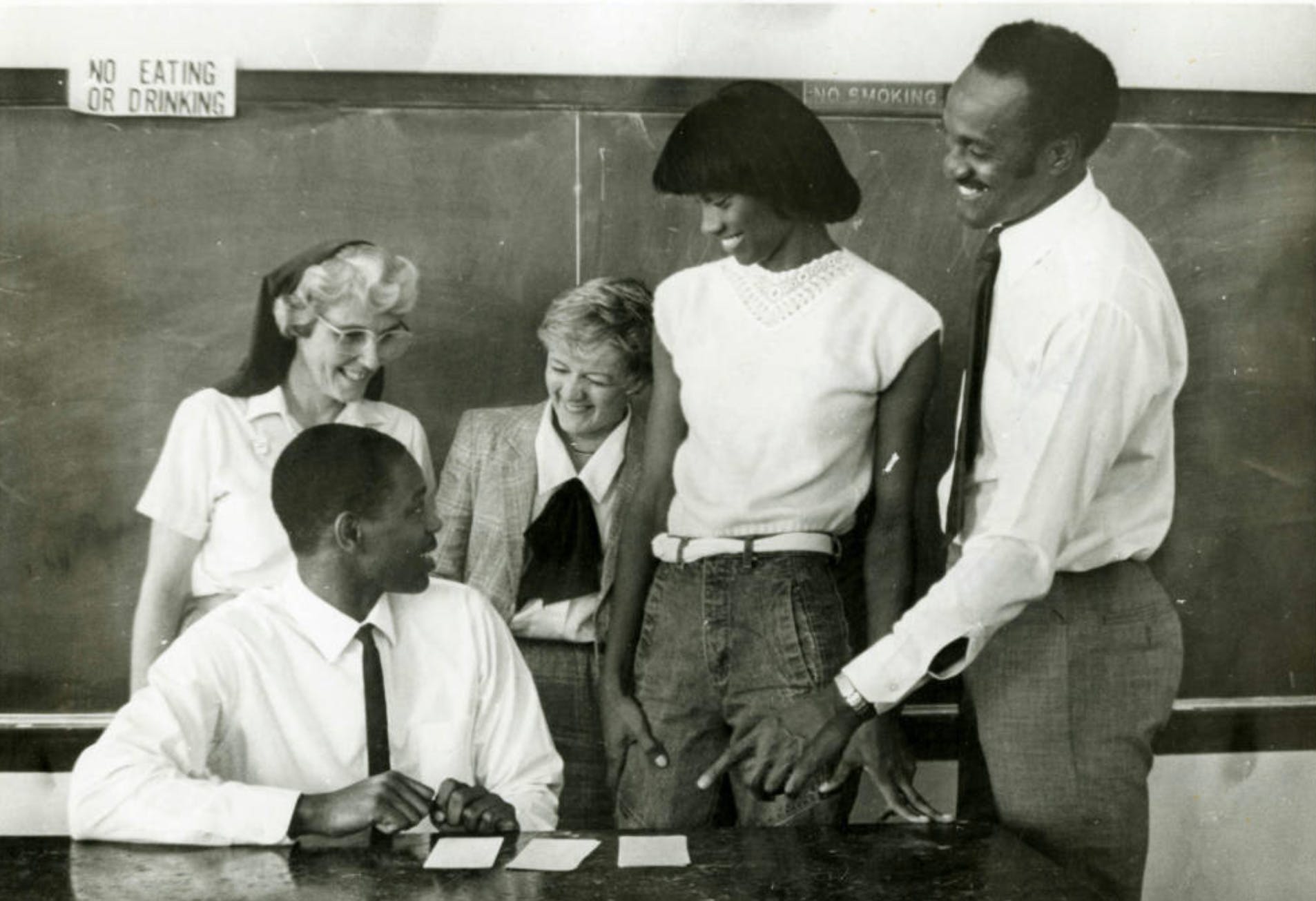 Sister Grace Mary Flickinger served as a member of Xavier’s biology faculty from 1968 to 2017. Together with Dr. J.W. Carmichael and Dr. Deidre Labat, she was central to developing Xavier’s premed program. In 1981, Sister Grace Mary also became an academic counselor to Xavier athletes, a role for which, in 1998, the National Association of Intercollegiate Athletics (NAIA) inducted her into its Hall of Fame. 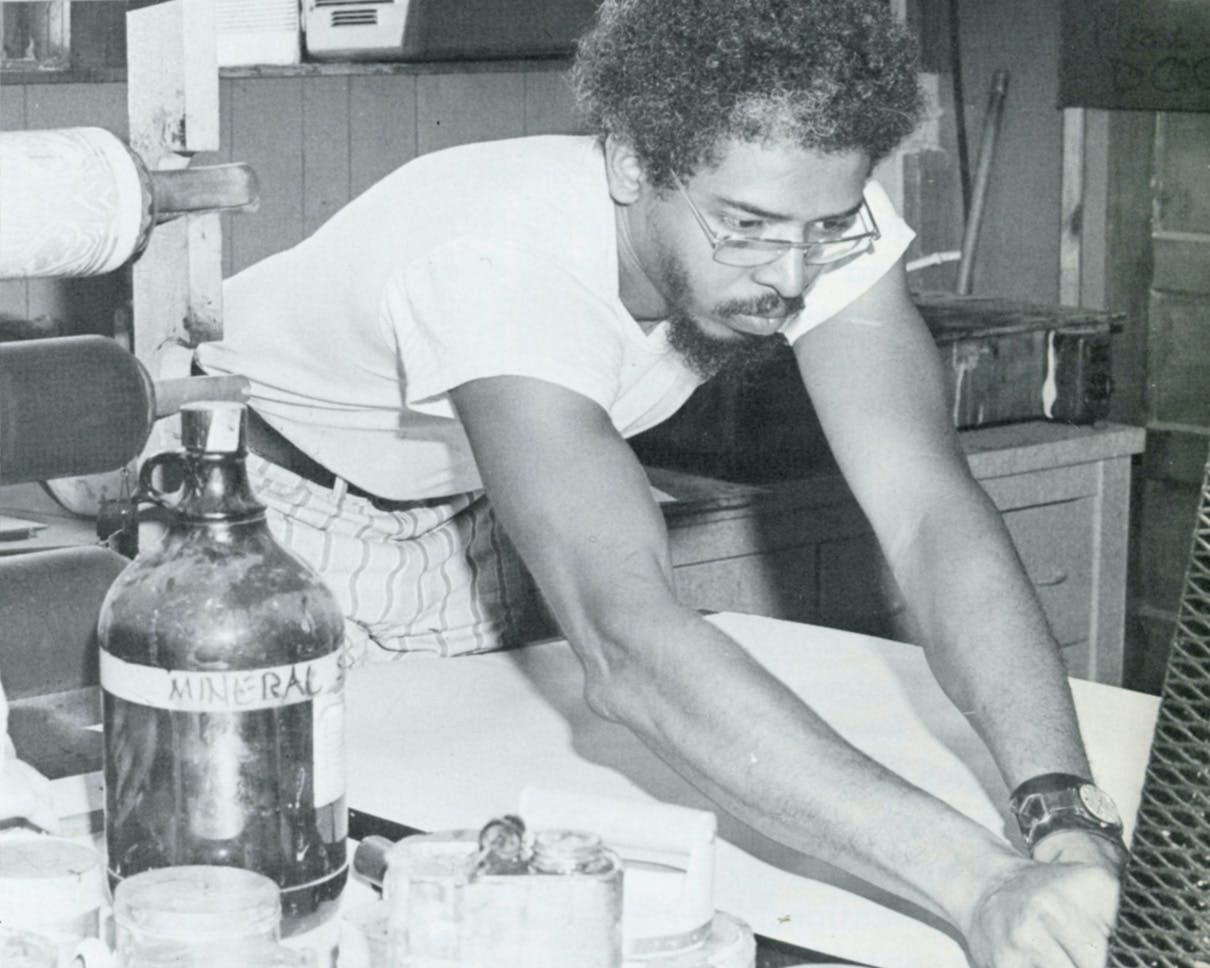 John T. Scott (XU '62) always said that his first training as an artist began at home, when his mother taught him embroidery. After graduate school, he returned to Xavier as a faculty member in 1965 and stayed for 40 years. His body of work includes wood cuts, paintings, collages, and sculptures, some of which grace the City of New Orleans, such as his "Spirit House" at DeSaix Circle and "River Spirit" at Woldenberg Park. His kinetic sculpture "Ancestral Legacy" stands—and yet also seems to float—at the center of Xavier's campus quadrangle. In 1992, he was awarded a MacArthur "genius" grant. He used the money to build a bigger art studio. 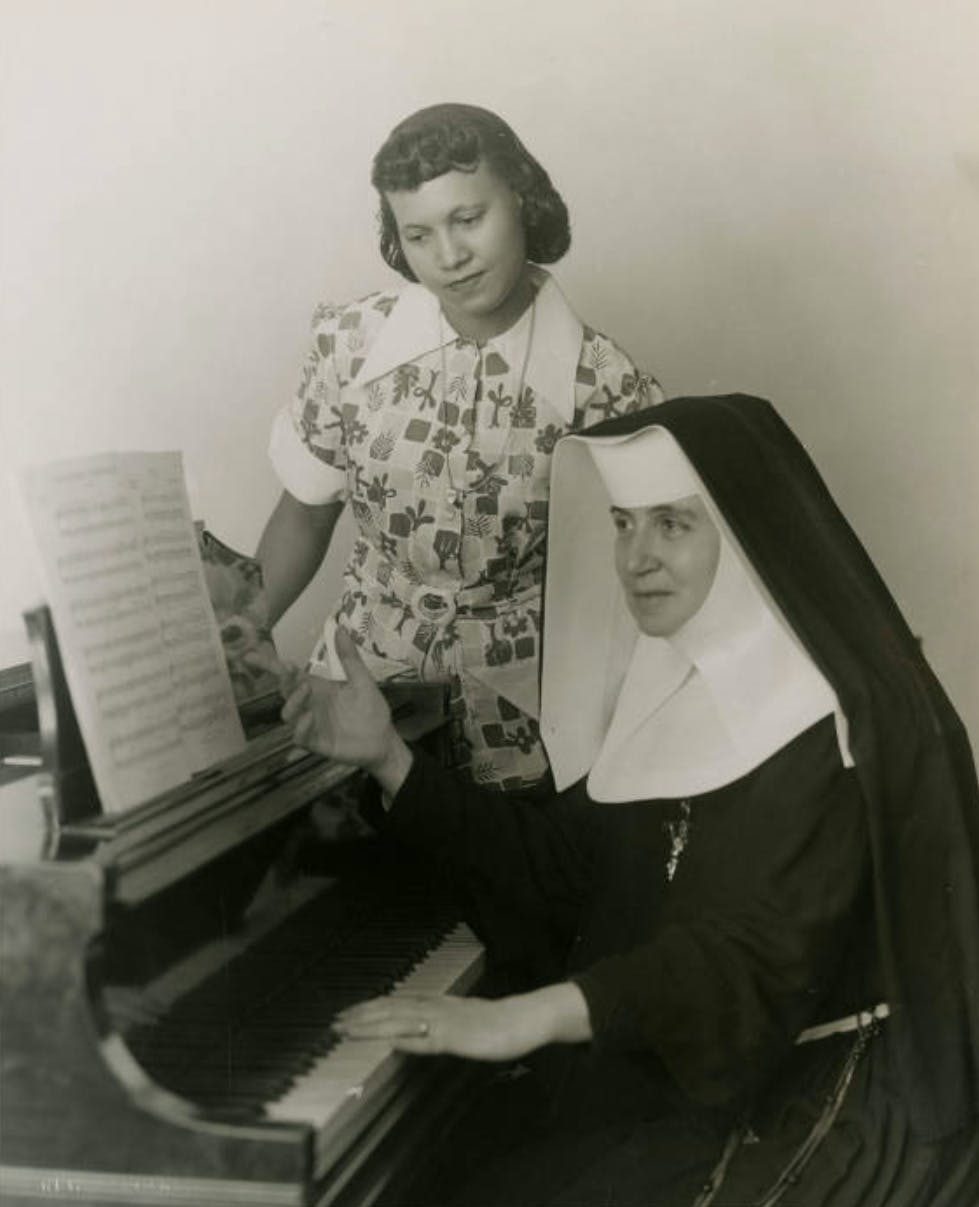 Sister Mary Elise Sisson had already enjoyed a successful career in opera when she decided to take religious vows. In 1934, she arrived at Xavier and established its music department, which, under her direction, included full-scale opera productions and trained a number of international stars. When her students were not welcome at "white" venues in New Orleans, she put on operas in Xavier's gymnasium. Her productions sold out to interracial audiences, an accomplishment that was not only rare, but potentially illegal in Louisiana at the time.